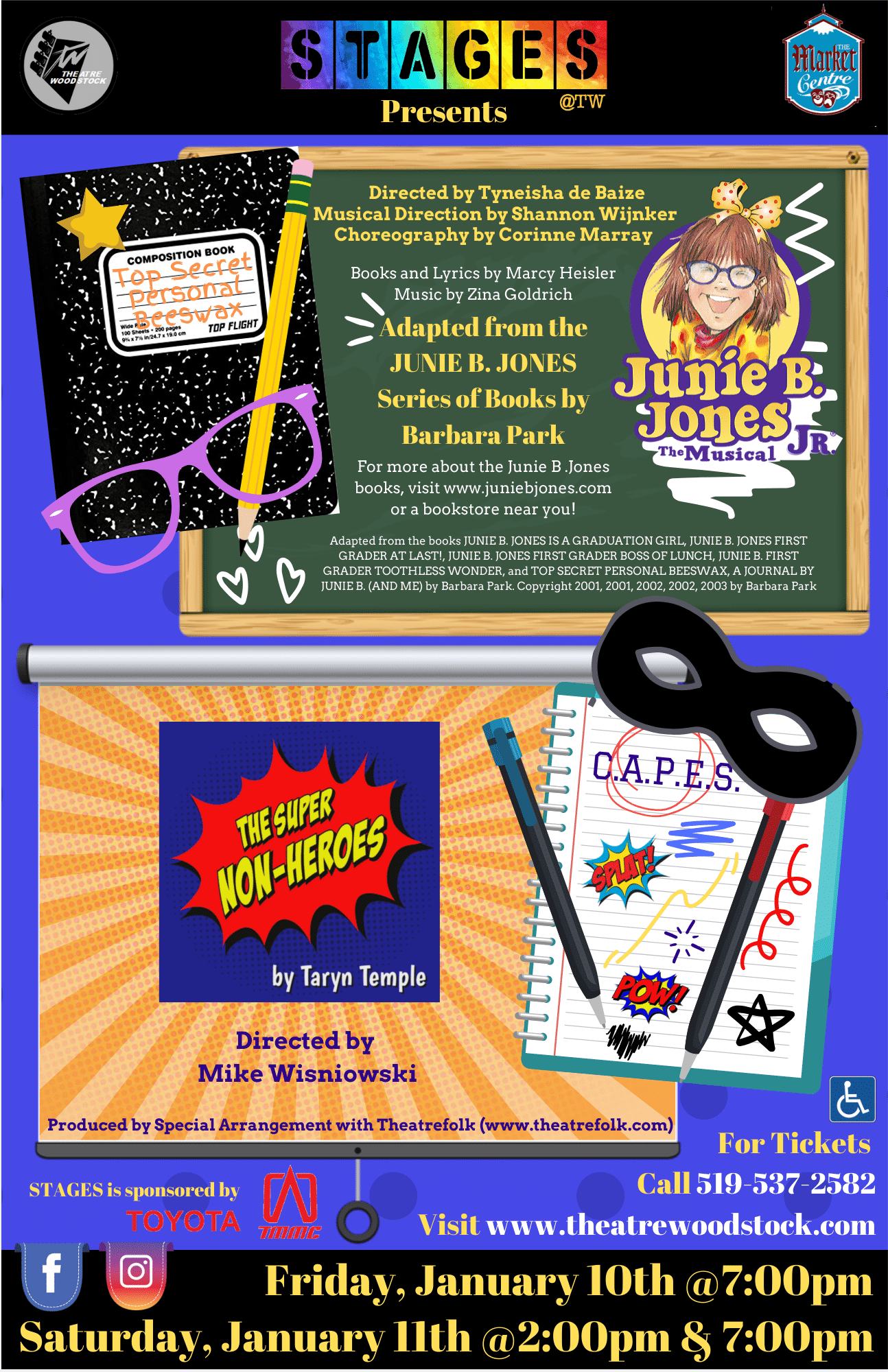 Act One: 1st Stagers in Junie B Jones The Musical Jr.Directed by Tyneisha de Baize Musical Direction by Shannon Wijnker Choreography by Corinne Marray Stage Managed by Vicki NichollsJoin Junie B. on her

Act One: 1st Stagers in Junie B Jones The Musical Jr.Directed by Tyneisha de Baize Musical Direction by Shannon Wijnker Choreography by Corinne Marray Stage Managed by Vicki NichollsJoin Junie B. on her first day of first grade, where many changes are in store: Junie's best friend Lucille has found new best friends -— and Junie B. makes friends with Herb, the new kid at school. While in Mr. Scary's class, Junie has trouble reading the blackboard — and she may need glasses. Add in a friendly cafeteria lady, an intense kickball tournament and a "Top-Secret Personal Beeswax Journal," and first grade has never been more exciting.Book and lyrics by Marcy Heisler Music by Zina Goldrich Adapted from the JUNIE B JONES Series of books by Barbara Park Adapted from the books JUNIE B JONES IS A GRADUATION GIRL, JUNIE B JONES FIRST GRADER AT LAST! JUNIE B FIRST GRADER BOSS OF LUNCH, JUNIE B JONES FIRST GRADE TOOTHLESS WONDER and TOP SECRET PERSONAL BEESWAX, A JOURNAL BY JUNIE B (AND ME) by Barbara Park. Copyright © 2001, 2001, 2002, 2002, 2003 by Barbara Park. For more about the Junie B books, visit www.juniebjones.com or a bookstore near you! Originally produced by Theatreworks/USA JUNIE B JONES JR Is presented through special arrangement with Music Theatre International (MTI). all authorized performance materials are also supplied by MTI. www.MTIShows.com______________________________________________________Act Two: The Super Non-Heroes by Taryn TempleDirected by Mike Wisniowski Stage Managed by Isaac AtfieldHave you ever felt like you don’t belong? Powerless Charlie sticks out like a sore thumb in a school full of superheroes. Smellinator can’t control her powers and forgot to do her Villain 101 homework. Golden Boy won’t follow protocol. And Toxic Sludge is, well, toxic sludge.When a supervillain attacks the school Charlie must dig deep within herself. She may not be a superhero but she discovers her unique talents to save the day.Produced by special arrangement with Theatrefolk (www.theatrefolk.com).